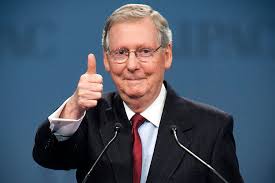 Last Spring Senate Majority Leader Mitch McConnell embarked on a risky plan to deprive President Obama of the chance to appoint a Supreme Court Justice during his last year in office.   McConnell  won that bet; now it’s time to consider what the final consequences of that victory will be. Some say it gives the Republicans  control of the Supreme Court for  the foreseeable future. But turning the   Supreme Court  into an overtly partisan institution may not serve anyone’s long term interests, especially those of the Republicans.

It’s true that Trump pulled off an upset in the electoral vote, but this was accomplished   against a weak opponent  after eight years of Democratic rule that had started  to sour many Americans. Still the demographic trends that everyone was touting a couple of months ago were not bogus; they make clear we  are becoming more and more a multi-racial nation just at the time the Republican party has branded itself as defender of the grumpy white male.

The demographic future belongs to the Democrats and, if they  show some attention to their traditional “average American” base, they should  win  the presidency convincingly in 2020  and long thereafter.  What happens to McConnell’s Supreme Court then?

McConnell’s attempt to create a “Republican” Supreme Court may come to an  ironic conclusion. Democratic  presidents till now have tended to appoint leftish  centrists  (Breyer,  Kagan ) while Republican presidents  have chosen conservative  ideologues (Scalia, Alito).  But  the new polarized political environment McConnell has created will change that; Democratic presidents will appoint  more ideological justices, tilting the court more and more to the left.

Of course, so long as they control the Senate, Republicans will  still be able to try the same tactics McConnell used so successfully last year to  stymie Obama.  But I don’t think that strategy will  have  much success, at least in the first 3 years of a presidential term.   The public has learned the reason we have an odd number of justices; an  even number is  a  recipe for  stalemate.

I also think that most Americans feel that a presidential nominee to the Supreme Court has a right to be considered and voted on by the Senate; defying  the conventional procedure will not be considered fair play. So too the public feels that the President’s choices deserve some deference.  It is not likely that the public would  uphold the routine Republican rejection of  the nominees  of Democratic presidents. Every time a qualified nominee is rejected, the next nominee will be harder to stop.

Once a Democratic majority on the Court is in place, the Republicans will reap the consequences of McConnell’s cleverness.  A permanent  democratic majority  will  feel entitled to dismantle the conservative constitutional structure that has endured since Nixon was elected. One of the first things to go will be the partisan gerrymanders which are the source of Republican majorities in the  House.

I recognize that   predictions of the political future are often wrong, as mine might also be.  In truth,  I hope I am wrong. I would welcome the  new doctrine, but  it would come at too high a price. An overtly  partisan Supreme Court is a bad idea no matter which party holds  the whip hand.

The Court’s legitimacy comes from the  people’s belief that the justices are  impartial judges, not  politicians in robes.    A good example is the Warren Court. The Warren Court’s decisions were controversial, but its legitimacy could never be challenged because its  two most influential members- Warren  and Brennan– were appointed by a Republican president. It was a “political” court in the sense that its decisions had serious political impact, but that is true of any Supreme Court.   It was never a politically partisan court.

The two most controversial cases of the 70’s were Roe v. Wade (abortion) and Bakke (affirmative action);  Justice Blackmun  wrote the majority opinion in Roe, and Justice Powell wrote   the controlling  opinion in Bakke.  Both were appointed by President Nixon. More recently, the Court settled the controversial question of same-sex marriage in the Obergefell case. Justice Kennedy, a Reagan appointee, wrote the majority opinion.

Unfortunately, we also  have a good example of a politically partisan case. It is, of course, Bush v. Gore where a Republican-appointed majority gave the 2000 presidential election to the Republican candidate by adopting a interpretation of the Equal Protection Clause none of them would  have supported if the names of the appellants and respondents had been reversed.

The Supreme Court’s political strength comes from the public’s acceptance of it as as  bi-partisan institution. It is not a good sign when the news media feel the need to identify the justices by the party affiliation of the presidents who appointed them.  A Supreme Court perceived as the tool  of a partisan ideology cannot perform its constitutional role as constitutional referee.

I hope that  President  Trump will   nominate a Republican Merrick Garland — a moderate, middle-aged judge who commands respect of all his or her  colleagues. Unfortunately, that’s not going t to happen. . And, if Trump appoints a  conservative ideologue, the Democrats will be guided by what might be the only universally accepted principle in American politics–“turnabout is fair play.”  In designing their  tactics, they will learn from  McConnell’s clever strategy in the Garland fight.