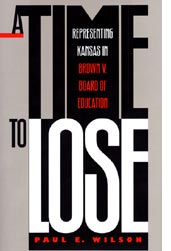 Paul Wilson was the lawyer who represented the State of Kansas before the Supreme Court in the case of Brown v Board of Education.   Fifty years after the Brown decision he wrote a memoir of his involvement in the case entitled A Time to  Lose. It’s a charming book on many levels, but I think it is especially valuable in giving us a candid picture of race relations in America and the Supreme Court’s attitude towards segregation just before the constitutional earthquake of Brown v. Board. of Education.

Mr. Wilson spends a good deal of time  showing his readers how race played out in Kansas history.  He explains that even though Kansas  had opposed slavery and fought with the North in the Civil War, most white Kansans still thought separation of the races “natural.” They believed in the superiority of the white race and had no moral qualms about segregation.  While they did not have a strong emotional attachment to segregation like citizens of the deep South, they were quite comfortable with it if it was the will of the majority.  And  that was the case  in most towns in Kansas where there was a substantial  African American population.   I must confess this does not sound very different from how  my neighbors on the Southside of Chicago felt in the early 1950’s.

But one reason  Kansans were comfortable with segregation was  the U. S. Supreme Court’s declaration   in Plessy v. Ferguson and subsequent cases that it was constitutionally acceptable.   Most Americans now think of the Supreme Court’s decision in Plessy as outright racist,  but Kansans in 1952 believed it to be well- established constitutional law and determinative of the issues in the Brown case.   The school district at the trial court, and Mr. Wilson for the State in the Supreme Court, relied exclusively on the legal authority of Plessy.

Part of the charm of Wilson’s book is the tale of how his life changed after he was chosen to represent Kansas before the Supreme Court.  He gives us a lively narrative of his preparation for arguing the case (including buying a new blue suit for the occasion), and of his impressions of the Supreme Court upon arrival  in Washington, D.C.

He also gives a description of the oral arguments before the court.  For me, the most striking fact is the reverence that many  justices showed the Plessy opinion which they  thought expressed well-established constitutional principles.  Justice Frankfurter spoke about the presumptive legitimacy that the “long established historical practice by the states…confirmed and adjudicated by state courts, as well as by expressions by this Court” (Wilson,  A Time to Lose,145)  gave to state-sponsored racial segregation in public schools.

But after oral arguments the justices seemed quite divided about what to do.  Instead of issuing a decision, they asked the parties to brief additional questions about the meaning of the Fourteenth Amendment.  Mr. Wilson had to go back to the law library

But then history intervened.  Dwight Eisenhower was elected president. He appointed Herbert Brownell as Attorney General. Brownell opposed segregation and the government’s briefs to the Court would express that view.  More importantly Chief Justice Vinson, someone insiders had predicted would side with the defendants in Brown, suddenly died.   Eisenhower appointed Earl Warren, the Republican governor of California, as Vinson’s replacement.

Suddenly a new epoch of American constitutional history opened. Warren persuaded the members of the court to issue a unanimous opinion overruling Plessy  and declaring “separate but equal” a violation of the Equal Protection Clause of the Fourteenth Amendment.

America and the Supreme Court has never been the same since. First, the Brown opinion  signaled a  national re-engagement with our history of racism.  Segregation was no longer an acceptable “long established historical practice” but a violation of the civic equality  the constitution promises all citizens. Southern states fought hard to neuter the Brown decision by the policy of “massive resistance,” and were at first largely successful. But soon Martin Luther King was able to use the Court’s holding that segregation was not only immoral but also illegal as a powerful weapon in the protests at Montgomery, Birmingham, and Selma, demonstrations that culminated in the passage of the Civil Rights Act of 1964 and the Voting Rights Act of 1965, the major civil rights documents of the twentieth century.

But these victories were soon followed by riots and looting which fed into Richard Nixon’s call for “law and order” in 1968. The Civil Rights Movement never again was able to mobilize a national majority to fulfill the promise of Brown.   And today killings in Ferguson and racist chants in Oklahoma make it clear that racism is not behind us. But, that said, the national reaction to these facts also shows that most Americans no longer view racism as a quaint local custom but see it as an evil that threatens our democracy.

Brown  also changed the Supreme Court.  Justice Frankfurter urged a deference to “lawful” authority that deprived the court of any meaningful role in enforcing the constitution’s political values.  Brown saw the constitution as a higher law that took precedence over legislative decisions.  It also refused to shrink the Constitution’s meaning to the narrow ambit of the particular evils the framers envisaged at the time the text was drafted.  Instead it was a repository of national political ideals applicable to new problems as they arose.  The Court eventually extended the equality principle of Brown to other discriminations like sex and sexual orientation.  And it also infused broad meanings into the speech and religion clauses.

The era of the Warren Court eventually ended  and a new more conservative court arose, but the nature of the court itself was no less political after the change.  The new court just chose different political values to enforce.  But that’s not surprising in a democracy as divided as our own.  The crucial question is whether we want a court of acquiescence or engagement.  I think that controversy is preferable to denial.  It’s better to discuss our differences openly than conceal them in pompous abstractions.

Paul Wilson felt no need to apologize for his role in defending the State of Kansas’ authority to permit school districts to segregate on the basis of race if they so wished.  He saw himself as an advocate and that was his client’s position. But he came to believe in retrospect that  1954 was Kansas’ “time to lose” because without the catalyst of Brown there would have been no impetus for white Americans to face up  to the problems of race.   I think he was right on both counts.